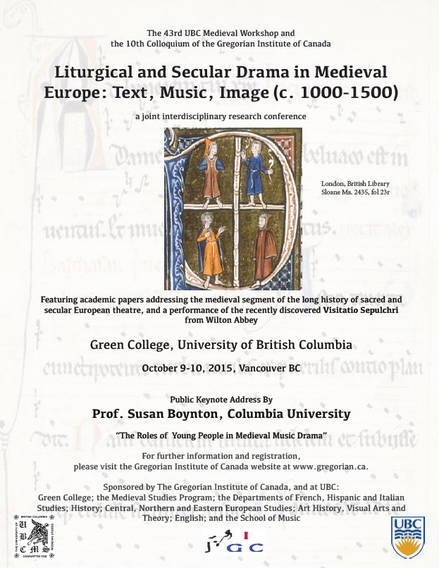 The Gregorian Institute of Canada and The University of British Columbia’s Medieval Studies Committee announce:

This conference will focus on the Medieval segment of the long history of European theatre. One objective will be to analyze aspects of the great repertoire of liturgical drama, from its supposed modest beginnings in the Gregorian liturgy of Easter, through its various developments in Latin and the vernaculars, into liturgical, semi-liturgical and secular plays.  Just as importantly we recognize the fact that European drama did not begin in the Medieval church. When one considers the secular themes appearing in semi-religious plays then in comic genres of the late Middle Ages, such as the farce, it often becomes necessary to study the direct or indirect influence of secular sources such as Latin comedies, Medieval French fabliaux, or the troubadours’ satirical dialogues. Beyond this intertextuality, combined in many cases with musical exchanges, Medieval drama gradually acquired visual components including manuscript illuminations, props, theatrical machines, sets, and different approaches to spatial organization in relation to the audience.  The transformations in drama over the period 1000-1500 are connected to evolving attitudes toward music in the church, music in theatre, spoken vs. sung plays, the place of the actor in society, religious and secular themes, interactions with other genres, and the manuscript tradition (notations, text transmission, stage directions and commentaries).